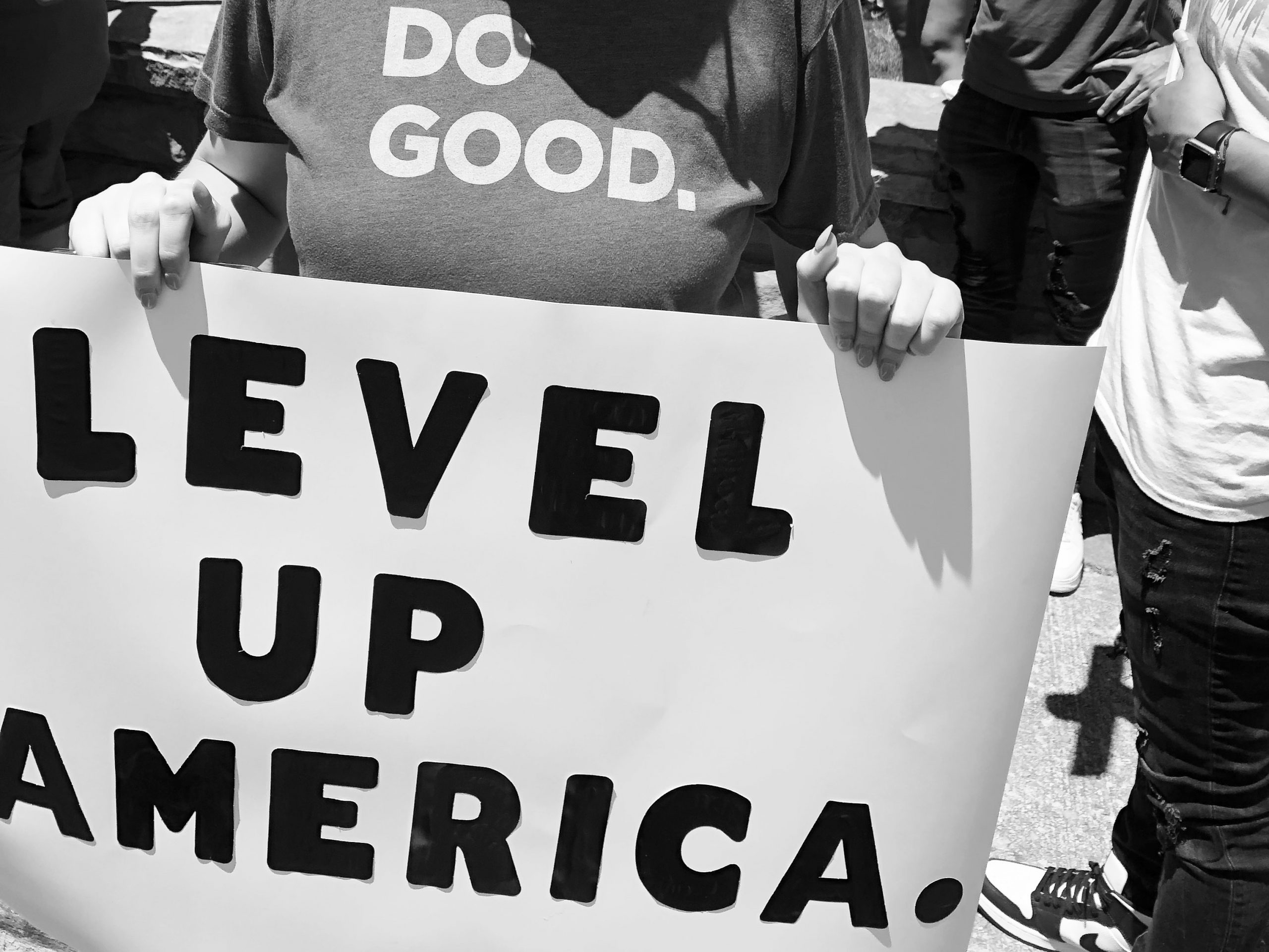 Here we are, America, on the cusp of change. Tens of thousands of people have taken to the streets—in the middle of a pandemic—to demand justice and fair treatment for Black Americans. The banners and signs and trucks and spray-painted bodies all shout BLACK LIVES MATTER. It is a rallying cry, a chant, a movement. It’s a phrase that will enter our history books and a term at the top of a 48 page-long Wikipedia article. But does that phrase belong to Black America? Or is it merely a licensable trademark that everyone will soon pay-to-say?

Why does it matter if Black Lives Matter/BLM/I Can’t Breathe becomes a trademark?

A symbol, word, or words legally registered or established by use as representing a company or product.

If a company (or nonprofit even) connects a word/phrase/image with its business, that representation becomes its trademark. Theoretically, as a legally enforceable trademark consumers will see that particular word/phrase/image and then think of that particular business. If a trademark holder formally registers its mark federally or within one or more states, the business gets to be the only one to use it in those territories for certain products or services. Others may freely use registered trademarks, and in some cases even unregistered marks, only if they first request permission (and typically pay royalties). This is called licensing. If a business starts using a registered mark without permission, that business can be sued by the trademark owner and be required to pay damages (lots and lots of money) for the unauthorized exploitation of the mark (also known as infringement).

So what does this have to do with a social justice movement?

If Black Lives Matter/BLM/I Can’t Breathe becomes a registered trademark, then with a handful of legal limitations, the term is no longer “free” for public use. Practically, it is unlikely anyone is going to be sued for trademark infringement for scrawling a registered trademark onto a poster board and marching in the street. But a trademark owner might prevent a company from hosting a BLM fundraiser or walk-a-thon, without first licensing the use.

Trademark owners have an obligation to police their marks by sending cease and desist notices to those using their marks without consent and are even expected to file infringement suits where unauthorized use continues. If a trademark owner consents to another using the mark, they’ve given that person a license. However, the owner still must monitor authorized use and instill restrictions and guidelines on how the mark may be used—failure to attach guidelines to a license results in a naked license (read: loss of trademark rights).

There’s no such thing as a benign mark—If someone pays money to get a registered trademark, it’s safe to say they’ll enforce their ownership against others, because if they don’t they can lose all trademark rights.

But who would take BLM away from the community and why?

As of the date of this article, there are nine pending trademark applications for “I CAN’T BREATHE”; one for “B.L.M”; and five for “BLACK LIVES MATTER.” The notion of trademarking any of these phrases and symbols, where the trademark owner could legally prevent others from using them in advancing the underlying social concerns, seems questionable.

But let’s not criticize our trademark applicants. Most of these applications were filed by non-attorney individuals, so I’d like to give them the benefit of the doubt and say the applicants just don’t understand the legal implication and power of a holding registered trademark. Likely, they just want to sell BLM t-shirts and masks.

A handful of applications were filed by organizations involved with the Black Lives Matter movement. It is very common for nonprofit organizations to seek the registration of their trademarks (like “AARP,” which claims over $1 Billion in revenue from licensing its trademark rights). Holding a registered trademark benefits nonprofits by allowing them to protect their brand and promote their recognition among the communities they serve, which ultimately aids their mission and social purpose.

There are a number of organizations who use the term “BLACK LIVES MATTER,” all seeking to eliminate racial injustice, albeit with different approaches and leadership. While nonprofits like AARP benefit from having the exclusive right to use their name, this is not necessarily a shared benefit for the BLM movement as a whole. While holding a registered trademark will certainly add legitimacy to any organization seeking to be perceived as official, by pursuing a registered trademark in the term “BLACK LIVES MATTER,” the trademark applicant may inadvertently discredit other BLM organizations by stating the term does not belong to anyone else.

There are applicants that seem to have good intentions behind filing. One British applicant—yes, BLM is being filed with international trademark authorities as well—told the World Trademark Review that he “planned to use any money raised to pay for the education of ethnic minority children in the English city of Manchester,” as reported by The National.

That applicant has since withdrawn the applications, after receiving significant public backlash.

Despite the intention of sending licensing profits to a good cause, what about all the individuals and business being prevented from saying “Black Lives Matter” because they can’t afford the licensing fees or refuse to sign such a silly contract? Those businesses are effectively being silenced just when our Black American neighbors, brothers, sisters and friends need us to shout, “BLACK LIVES MATTER!” the most.

Is this something I should worry about?

As a trademark lawyer, I believe most of these pending applications will fail to reach registration. One particular “I Can’t Breathe” application has been issued an Office Action (lawyer-speak for “registration rejection”). The trademark office rejected the application for a number of reasons, one issue being that there was potentially a false association of the phrase to Eric Garner. Eric Garner was a Black American placed in a chokehold by an NYPD officer in 2014, causing him to gasp out “I can’t breathe” 11 times until he lost consciousness. Eric was later pronounced dead at an area hospital, an incident of police brutality that is eerily similar to what recently happened to George Floyd in May of 2020, who also cried, “I can’t breathe” while an officer held him to the ground by a knee to his neck, ultimately causing his death and causing a wave of protests in response to the cruelty.

Secondly, the “I Can’t Breathe” mark was denied registration as “merely conveying an informational message” and failing to function as a trademark. When a mark does not serve as a source-identifier but merely conveys support of, admiration for, or affiliation with the ideals conveyed by the message, the mark will be rejected.

For similar reasons, twelve other “Black Lives Matter” trademark applications were rejected and deemed invalid by the trademark office.

So if the law prevents social justice terms from being trademarked, there really is no problem, right? Not quite.

This is where crafty lawyers and legal representation come into play. While a “Black Lives Matter” mark will certainly face significant difficulty reaching registration, slight variations of the anthem performed better. In 2017, a legal team successfully achieved registration for the mark “BLACK LIVES WILL MATTER TO THEM. WHEN BLACK LIVES BEGIN TO MATTER TOO US” for athletic clothing. This is also a history of other widely popular phrases being trademarked as well.

The clever G > ^ V  symbol represents the phrase “God is greater than the highs and lows.” It started showing up in mid-2013 as Nick Jonas’s latest tattoo. Soon, troves of G > ^ V tattoos, bracelets, and tees started showing up on social media, mostly due to its religious symbolism and the minimalist nature of the marking. It was an instant hit. It was viral.

Eventually, two brothers created a clothing venture after applying for and receiving a trademark on the symbol. Despite the hundreds of thousands of shares of the Jonas tattoo on Instagram and other retailers already selling G > ^ V merchandise, the brothers’ venture GODISGHL LLC, with trademark in hand, began demanding that retailers far and wide stop using the symbol . . . or else.

Our client Elevated Faith got one such letter and is now engaged in a cancellation proceeding against the mark. In our view, the G > ^ V symbol belongs to everyone—just as the social justice term “Black Lives Matter” belongs to all of America, inspired by African Americans, and supported by those who freely want to support efforts against injustice without commercial obstacles.

There is potential harm in allowing such meaningful terms to reach trademark registration. How do you stop it? Keep shouting BLACK LIVES MATTER and stand against racism . . . and improper registration.

A petition to stop the trademark registration Black Lives Matter and I Can’t Breathe has been created on Change.org. You can find it HERE and sign your name next to 19,000+ others.

LASTLY, THIS IS NOT LEGAL ADVICE. I AM NOT YOUR LAWYER. NOTHING IN YOUR REVIEW OF THIS ARTICLE OR ACTIONS  YOU TAKE IN FURTHERANCE OF IT ESTABLISHES A LEGAL RELATIONSHIP BETWEEN YOU AND ME. I PROBABLY DON’T EVEN KNOW YOU, THOUGH WHO’S TO SAY WE CAN’T BE FRIENDS? NOTHING IN THIS ARTICLE IS WARRANTED TO BE ACCURATE IN ANY WAY, AND THOUGH PRACTICALLY UNLIKELY, IT IS POSSIBLE THAT THE SUBSTANCE OF THE ARTICLE CAN KILL, HARM, MAME, OR OTHERWISE DEFEAT YOU, PARTICULARLY IF YOU ARE READING IT WHILE WORKING FROM HOME WITH KIDS. YOU SHOULD NOT RELY ON ANYTHING IN THIS ARTICLE WITHOUT INDEPENDENTLY DISCUSSING IT WITH YOUR LAWYER. YOU PROBABLY SHOULD HAVE ALREADY BEEN IN TOUCH WITH A LAWYER BEFORE READING THIS ARTICLE. LAWYERS ARE A GOOD THING – ALSO NOT LEGAL ADVICE.

Lauren Hughes is the privacy and trademark lead at RVL®. Her other musings include:

What are the Benefits of a Registered Trademark?

The California Consumer Privacy Act Doesn’t Apply to Me, Does It?