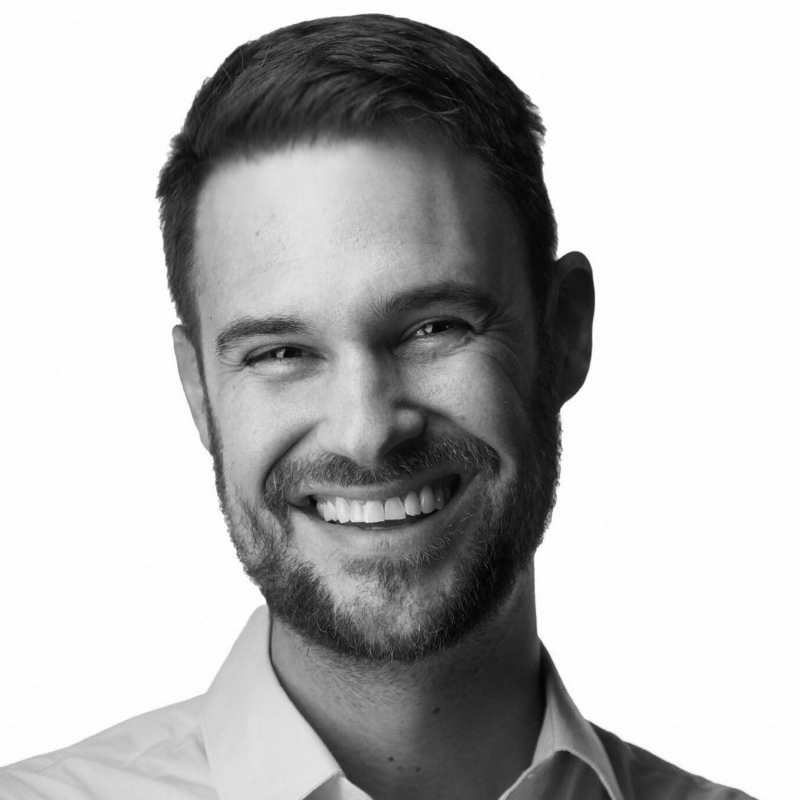 Meet Alex Abell, Founder, CEO & “Lunch Break Enforcer” at Lunchpool. Lunchpool, recent winner in the “Emerging Tech” category at the 2021 Synapse Summit Innovation Awards, creates highly customizable virtual events (see them in action here). Using innovative tools and platforms from around the globe, Lunchpool has brought countless people together at a time when COVID safety measures have cancelled most in-person events. We caught up with Alex to talk about how Lunchpool fits into the wave of social technology innovations, the future of virtual events post-COVID, and how Knoxville, Tennessee, has facilitated the rapid growth of Lunchpool.

Social technologies present us with a paradox. They enable connection on a greater scale than ever before, but their rise has also coincided with the highest levels of loneliness, social isolation, and depression we’ve ever seen before. How does Lunchpool fit into this pool of social technologies?

Ending loneliness and social isolation by helping people feel belonging and inclusion is exactly the problem that we started out to resolve. Lunchpool started two years ago, before there was even a pandemic. I saw a problem, namely that people aren’t connecting. And as you get older, it’s harder and harder to connect.

As humans, we want and need social connection. Thanks to modern technology, especially social media, we’re starving for it. The problem is that tech companies sold us on the idea of a free service that would connect us together. But once we were hooked on their “free” products, they sold us out. Companies like Facebook, LinkedIn, Instagram, etc, all made us believe in a more connected world, a world where people could come together, celebrate our humanity and hang out, regardless of geographic barriers. However, it is becoming more and more clear that their true intention is to keep us glued to our feeds.

The idea of Lunchpool was born after my wife started finding too many receipts from all the lunch breaks I was taking with my lunch crew. After that, she started packing my lunch. So I’m sitting there, eating my lonely desktop salad, and I look around to see that most of my coworkers are sitting there as well scrolling through their Instagram, LinkedIn or still checking their email.

At that point, I realized that we can use technology to make connections that are just as strong as the ones that I had with my original lunch crew. Lunchpool has been in exploration mode ever since. We started by building an app that was a closed social network to help people connect within companies. When COVID happened, we pivoted to utilizing other technologies that existed to help people gather together around virtual tables. We started with lunch breaks but really expanded to fill the need the crisis brought on.

The bottom line: our mission is to use technology in intentional ways to genuinely connect people.

What’s your prediction for the post COVID landscape? Are virtual events going to be thrown out of the window?

A lot of people are on edge about that, but the general consensus is no.

The diffusion of innovation curve explains how innovations are adopted: adoption of new technology starts with innovators, then moves to early adopters, early majority, the major majority, and finally the laggards come along. We’re now in a place where virtual communication and video technologies have reached a critical mass. By now, nearly everybody has been shifted towards virtual communication by sheer necessity. Even my grandpa uses Zoom.

Moving forward, it’s about breaking down those barriers between digital and physical, so that you can connect no matter no matter the format. We’ve already seen the shift of the enterprise market adopting virtual because they’ve realized how much money they can save.

In my view, the future is definitely hybrid. Not a lot of people really know what that means. I think of it as the next evolution of the internet, like web 3.0. A lot of people call it the spatial web, because it’s a rich augmented data layer and it has spatial aspects that resemble the physical world. Further, there are companies all over the world that’ve been implementing things like spatial chat. Unlike Zoom, where there are just a Brady Bunch of boxes on the screen, spatial connection brings a simulated environment so it feels like a video game. 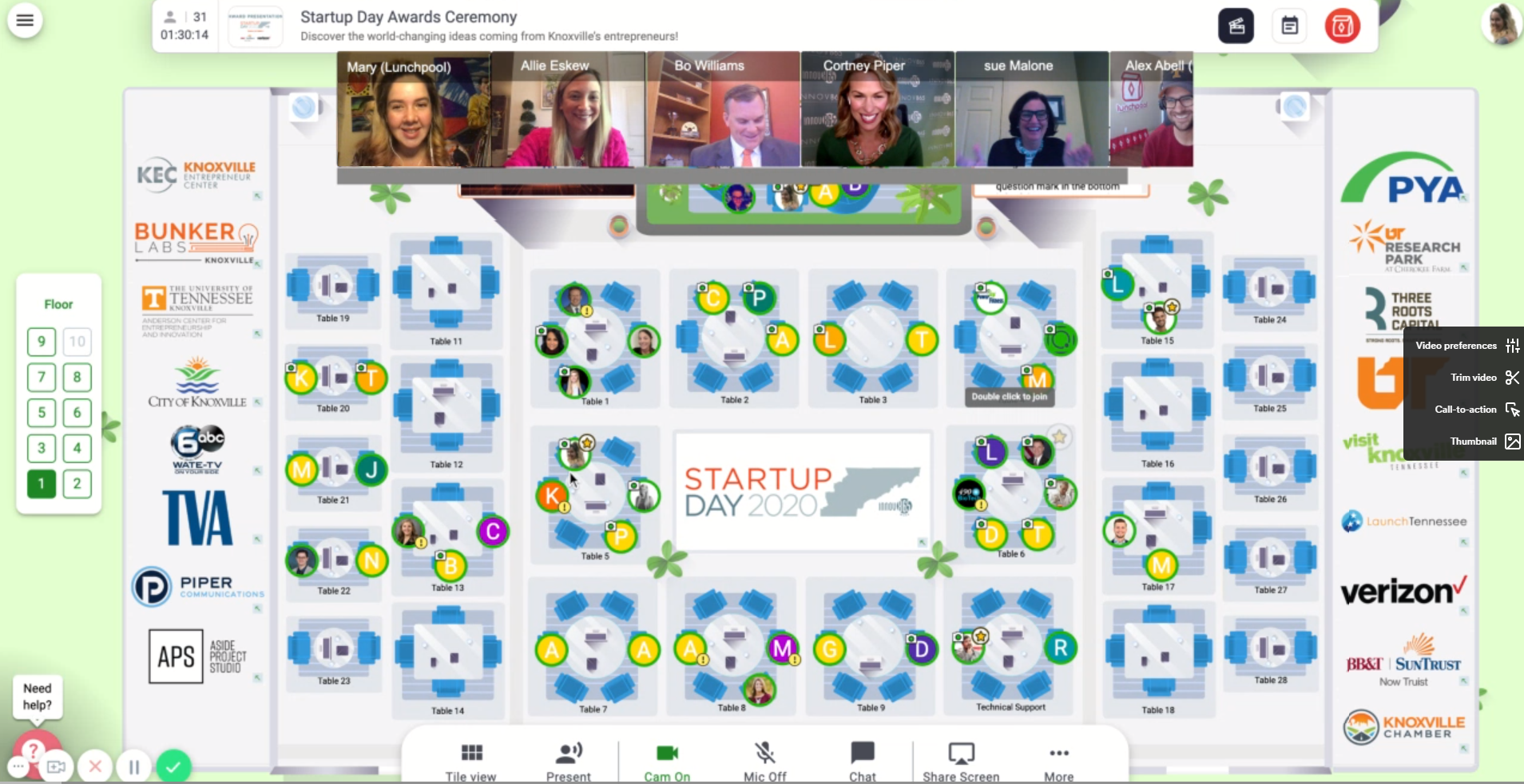 This virtual, simulated physical space is what I call the Internet of experiences. At Lunchpool, we’re building all of our events as dimensional experiences.

How has building in Knoxville helped to facilitate your success with Lunchpool?

We were born in Tampa Bay, but we were made in Knoxville.

Lunchpool launched in Tampa Bay, and we really grew out a vast network there that was helpful in that early growth stage. But we didn’t make any revenue until we moved to Knoxville. I think that the connections here in Knoxville and the deep network of people helped us tremendously.

I call Knoxville the Collaboration Capital of the Southeast because it is such a collaborative environment. I don’t feel like many people view things as competition. Instead, they tend to approach things like: “We have a similar goal; let’s collaborate.” People like Brandon Bruce – I can’t say enough about how he’s helped open doors for us. You have to have people that are willing to introduce you to the right people and organizations.

Knoxville is a pretty amazing place, and it’s been super instrumental in our growth. I don’t know if we would have been able to get to where we are from anywhere else, honestly.

If you could change one thing about consumer behavior in the interest of your values, what would it be?

There’s this principle of the unintended consequences of technology. A lot of people blame technology for all of their problems. But, in reality, it’s human behavior to blame. It’s the fact that we use technology in different ways. And one way of using technology is as an escape, rather than as an extension of the physical world.

Polarization, I think, is an unintended consequence of technology. The algorithms of social media are built for engagement. Engagement can either be people that you’re going to agree with, or people who are saying and posting things that will make you really upset. It’s kind of a catch 22, but it all depends on being able to better embrace people that think differently.

At the beginning of the year, Tom Ballard (a pioneer in the Knoxville startup community) reached out to a handful of Knoxville startups and asked, “What are your hopes and goals for the community and society in general this year?” I told him that in the new year, I hope that people in our community and the world at large will gather together and embrace differences of opinion as opportunities to widen their own perspectives.

That’s what I wish people would modify. The mindset of, “I need to find people that think the same thing as me.” Instead, we should seek out people that think differently. Especially around food and drinks, the great unifiers. That’s why we stuck with lunch, because it’s a break in your day in which you can eat and connect with people. Sitting and talking with people of a different sexual orientation, race, or religion — and doing so with an open mind — sharpens your beliefs and opens you up to understanding why someone else sees the world the way they do. It’s that diversity of thought, perspective, opinion, and belief, that is ultimately what breeds innovation and makes the world a more fun and loving place.

Put simply, we bring people together using the world’s most innovative tech. Around tables, inside virtual ballrooms, or lounged out around digital swimming pools, we will connect you with the people you ought to know and the experiences you should be sharing together to make your breaks more meaningful. We’re on a mission to completely eradicate feelings of isolation, disconnectedness, and boredom in the workplace and the world at large by using our technology to foster true, human connection. Learn more at www.letslunchpool.com.